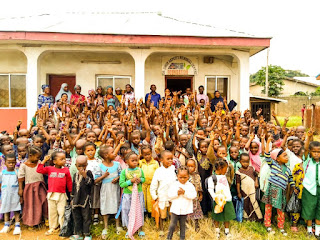 In her continuous quest to promote education, SDP
governorship candidate for November 16 election
in Kogi state, Barr Natasha Akpoti has paid the
tuition fee of her 600 adopted children for
2019/2020 academic session. The 600 children who are mostly orphans were
carefully selected in Kogi Central in 2016 and she
has been responsible for their school fees, clothing
amongst other things. Speaking through her Personal Assistant, Hamza
Lamisi, Natasha reinstated her commitment to
service to humanity. A cause which she said she
will never forfeit for any other for as long as she
lives. He mentioned that efforts are ongoing to ensure
such educational support gesture is extended to
other rural communities across Kogi State. According to him, “this year marks the 5th year of
the existence of this educational support scheme.
She has never been distracted neither does she get
tired of attending to the children’s educational
needs. “This is the kind of leader the society needs.
Someone whose words you can hold on to and you
will never have the cause to regret”, he said. Speaking on the success of the exercise, he said
the team went to each of the pupil’s beneficiary
school to pay directly to the school management
and provide every other things that will aid the
pupils learning. According to him, Natasha Akpoti had earlier in
2017 opened Builders Hub Community Learning
Center for the 600 adopted children which he said
comprises of 10 computer sets alongside a mini
library inside the center to revive the reading
culture that’s fast fading away. During the opening ceremony of the programme on
May 19, 2017, Natasha Akpoti explained that the
mini library contains 414 books centred on African
cultures, tradition and African stories donated by
the National Inland Water Resources. “Education is the foundation of development and a
key to societal growth and it has become important
to contribute to its growth”, she said. Appreciating her efforts to promoting education in
the land, the Headmaster of Central Primary school
Obeiba, Ohino David, said Natasha Akpoti has
proven beyond every odds that she is solely out to
give hope to the hopeless. “The payment came as a surprise to us, we don’t
expect it at all because of the money she has been
spending on her senatorial case in court. For her to
still remember and consider the children’s school
fees a priority, she has really demonstrated that
solving the people’s problems and changing the society is her major concern”, he said. David, however, disclosed that they are currently
facing infrastructural challenges, adding that most
of the classes in the schools have no chairs. According to him, the situation is virtually the same
in most of the primary schools in the area, calling
on the government and other individuals in the
senatorial district to come to their aid. Natasha who was spurred by her penchant for
education; the need for an average Nigerian to
have education and to demonstrate the lesson
taught by her father adopted the 600 pupils’ tuition
fee in 2016 in commemoration of her late father,
Dr. Jimoh Abdul Akpoti of blessed memory. Akpoti adopted the primary education of the 600
pupils among whom are 278 Orphans, she has
been responsible for their tuition fee, providing
school bags, clothes, shoes and other necessary
materials for them.